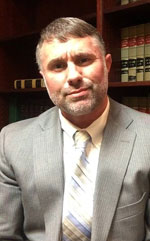 As a trial lawyer with over 20 years of litigation experience, Jarrod Nichols has handled and litigated hundreds of cases on behalf of those who have been injured, killed, defrauded or otherwise wronged by other individuals, insurance companies, financial institutions and various other agencies and corporations. He has tried and obtained favorable verdicts in numerous cases across the State of Alabama throughout his years of practicing law.

Jarrod graduated from Jacksonville State University in 1997, majoring in Political Science with a concentration in Pre-Law, with a minor in English, and earned his Juris Doctor Degree from Birmingham School of Law in 2000. While attending law school, Jarrod clerked for the Honorable J. Scott Vowell, Presiding Judge over the Tenth Judicial Circuit of Alabama. In addition to numerous trials and successful verdicts throughout his career, Jarrod has been successful in obtaining large verdicts in arbitration cases, including those under the American Arbitration Association, and has also argued successfully before the United States Court of Appeals for the Eleventh Circuit. He is a member of the Birmingham Bar Association, Alabama State Bar Association, American Bar Association, The Alabama Association for Justice, and the American Association for Justice. His areas of practice include big truck (18-wheeler) and automobile collision accidents, drunk or drugged driving wrecks, road construction defects, construction site accidents, fraud, Section 1983 police and government agency liability, commercial breach of warranty, and wrongful death cases. We have secured well over

in verdicts and settlements for our clients

GET A FREE CONSULTATION

In 2000, our firm was founded by two legal veterans with decades of experience representing victims of serious personal injuries and other losses. Since then, we have secured verdicts and settlements for hundreds of clients for over 100 million dollars.